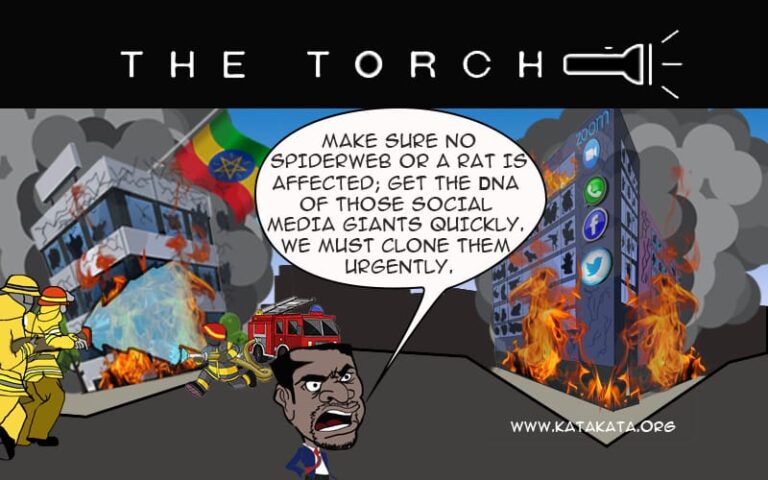 Imagine your house was burning while you were busy chasing a rat around. Can you envisage inviting firefighters to extinguish the fire blazing your mansion, only for the fire bridges to start removing the cobwebs on the roof, rather than putting off the fire and saving precious lives and properties? The recent announcement by Ethiopia that it would develop its social media platforms after accusing global companies like Facebook of bias against Ethiopia’s interest is not only a gross misplacement of priority; it questions the seriousness and commitment of Ethiopia’s leaders towards finding a lasting solution to the country’s explosive problems. Recently, the director of the country’s Information Network Security Agency, Shumete Gizaw has accused Facebook and Twitter of being an instrument of political forces, after the social media giants partially blocked some government’s accounts and removed their content. Facebook and Twitter said they acted during the June elections to remove a network linked to the government, which the social media organisation accused of spreading fake news. In response, Mr Shumete said his government would develop platforms that would substitute Facebook, Twitter, WhatsApp and the video conferencing platform Zoom. The Ethiopian government’s attempt to develop its social media platforms while the East African country is heading towards anarchy, cannot come at a worse and inappropriate time. Since November 4 2020, Addis Ababa has been in a protracted war with the autonomous-seeking rebels in the Northern Tigray region of the country. Even though Ethiopian Prime minister Abiy Ahmed vowed to crush the insurgency and end the conflict within a few weeks, the situation on the ground has deteriorated and become more deadly and messier than anyone would have thought. After initial military gains, the federal troops have retreated on June 28 after the rebels recruited new volunteers, rebounded and retook many of its lost territories, including the regional capital. The nine-month conflict has caused thousands of deaths and replaced almost 2 million people. Worse still, reports of human rights abuses, including ethnic cleansing, rapes and other sexual violence have become rampant. The United Nations officials have warned that some parts of Tigray face humanitarian catastrophe and perhaps the world’s worst famine ever experienced recently. It does not help that other ethnic groups in Ethiopia threaten war and, perhaps, a forceful secession from the central government. Faced with all these insurmountable challenges and the near disintegration of Ethiopia, the last thing the government should concern itself with is creating its social media. The Ethiopian government and all peace-loving Ethiopians must channel their attention and resources towards peaceful co-existence. They can achieve this vital task by creating a harmonious and progressive society where everyone, irrespective of their ethnic lineages can live happily and contribute with dedication towards Ethiopia’s development.