Ivory Coast: The Right Time To Do the Right Thing 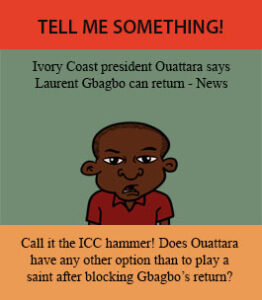 Personally, the thought of the West African country Ivory Coast invokes conflicting images of nostalgia, quintessence, lawlessness, precariousness and uncertainty. There was once a country. Peaceful, self-reliant and economic giant a nation its citizens dreamt about. Not anymore. Greed, power drunkenness, nepotism, disregard for the rule of law, insensitive to the citizens’ plights have turned the once restful Ivory Coast into a land of instability, chaos and political uncertainty and systematically rekindled the social cognition of an average Ivorian along the ethnic line. A dangerous prerequisite for disintegration and harbinger for doom. I am one of the apostles of the philosophy, which says that most of the problems confronting human beings are self-inflicted. Nor are human beings born evil; instead, our socialisation, flaws in our characters, and mindsets give credence to our social choices and their effects on us and our environments. If history is anything, it is not just a past; instead, it is an educative mirror of reflection that helps us to avoid past mistakes; it leads us to the road of prosperity and progress if we make the right decisions. On the other hand, failure to learn from past mistakes is a catalyst to inevitable mayhem. Ironically, Alassane Ouattara became the President of Ivory Coast after he forced the former President Koudou Laurent Gbagbo out of office, following Gbagbo’s refusal to give up power after allegedly losing the Presidential election. It is a matter of argument whether former President Gbagbo lost the election or not. But it is a fact that the country’s constitution banned President Alassane Ouattara from contesting for the third term. The arrest and prosecution of President Gbagbo at the International Criminal Court (ICC) could not be a better recipe for President Alassane Ouattara. With his political nemesis gone, one would have expected Ouattara to use the rare opportunity to unite Ivorians and create jobs, trust and stability. Alas, the opposite has been the case. President Alassane Ouattara squandered the golden opportunity. Accusations of repression, nepotism, marginalisation, political thuggery and power struggles have become the order of the day. The International criminal court tried former President Gbagbo and exonerated him of all the accusations levelled against him. Yet, some powerful elements allegedly worked tirelessly to keep him in Den Haag rather than allow him to return to his country. Have Ivory Coast leaders learned from the past? Hardly not. President Alassane Ouattara’s decision to illegally and unconstitutionally contest for the third term for President, following the death of Prime Minister Amadou Gon Coulibaly, effectively puts Ouattara’s selfishness and egoism above the interests of Ivorians. But like other African leaders before him, who are allergic to the constitution, the egoistic interests of President Ouattara come before the unity, stability, peace and progress of his country. Today, Alassane Ouattara has stubbornly forced himself on the Ivorians in an allegedly flawed election. Indeed, that reckless decision to disregard the law has become a recipe for violence, instability, and dichotomy in Ivory Coast, a country that was once the oasis of stability. The ICC had given its final verdict. The international criminal court instructed that former President Gbagbo must be allowed to go home. President Alassane Ouattara has no choice. He has to obey the ICC. All Ouattara’s political arithmetic, abracadabra, hocus-pocus and mumbo jumbo seem to have failed in his attempt to cage popular Gbagbo. On the other hand, Gbagbo’s supporters welcomed the ICC announcement with jubilations and ecstasies. Is the unconditional release of former President Laurent Gbagbo a new page and a unique opportunity for all Ivorians to put their differences aside and build a peaceful, powerful and egalitarian Ivory Coast? Does Alassane Ouattara think same? Not – at least, judging from his conducts and rascality. Yes, Alassane Ouattara had ‘welcomed” the ICC’s verdict and instruction that Gbagbo is free to return home. The upcoming months will reveal Alassane Ouattara’s sincerity, honesty and willingness for political accommodation aimed at building a prosperous Ivory Coast. The future of Ivory Coast is in the hands of its citizens; it is either they collectively come together as a united force, set their differences aside and build a progressive and prosperous Ivory Coast. Or they choose personal interests above the common socio-political cum economic dividend, which may put the country on inflammable fire. The choice is indeed in the hands of the Ivorians.