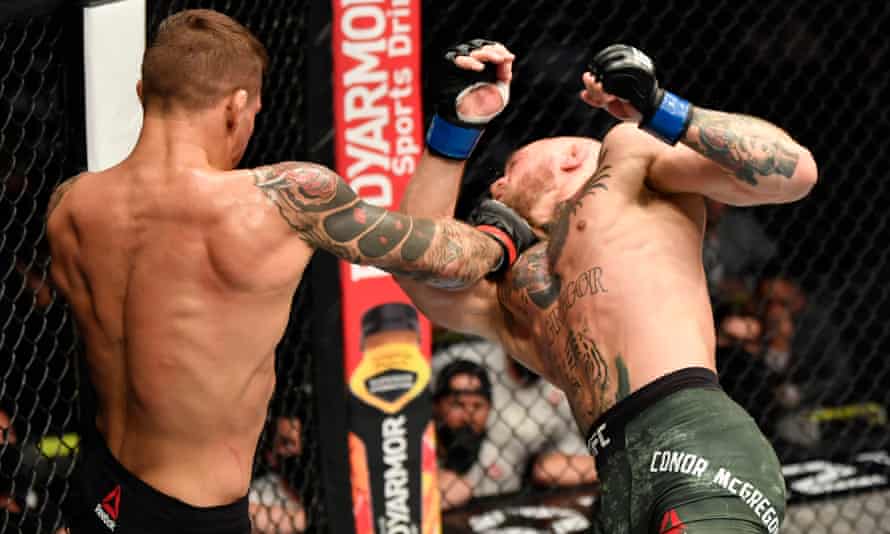 Dustin Poirier has outclassed Conor McGregor in the much anticipated UFC 257 fight, which took place today in Abu Dhabi, United Arab Emirates. After six and half years of waiting, the American Dustin Poirier took revenge on his Irish opponent, whom many sports pundits predicated to win the re-match. The first fight “The Diamond,” ended in favour of McGregor after he stopped Poirier in the first round. But today’s UFC fight was a turnaround that saw the much-improved Poirier outmanoeuvred McGregor with sharp and accurate kicks and hard punches, which send the Irish opponent on the floor in the second round. With a 10-2 run victories over four former champions, Poirier has proved himself a force to reckon with in the UFC ring. Although he was the No. 2-ranked lightweight, many saw him as the underdog against Conor McGregor. That perhaps proved to be McGregor’s undoing and may have worked on Poirier‘s advantage. Conor McGregor started the first round confidently with kicks and punches, but the composed Poirier seemed not intimidated, as the American went for a takedown. That takedown perhaps sent a warning to Conor McGregor, who had effectively subdued his opponents with his precision striking and dangerous left-hand punches. It became clear to McGregor that the second fight with Poirier may not be a child-play after all. And a child-play it proved not. “The goal was to be technical and to pick my shots,” he said. “I know Max Holloway says he has the best boxing here, but I have two wins over the kid. I boxed well with Conor.” Dustin Poirier explained. Poirier put his tactics into practice in the second round with calf kicks, which started to prove devastating on McGregor. Immediately the American noticed that his kicks were having the desired effects on his Irish counterpart, Poirier began to mix up his strikes. Using both his left and right hands to deliver punches, McGregor’s strength left him and he soon found himself on the floor, inviting Dustin Poirier to deliver another hard blow that forced the referee to stop the fight. “I’m happy, but I’m not surprised, I put in the work,” Poirier said after the fight. Dustin Poirier’s victory, which is the fifth over former champions, positions him as the next opponent of the undefeated champion Khabib Nurmagomedov for the lightweight title. It is still a question whether the retired Nurmagomedov will come out of retirement to McGregor in a rematch. Although defeated, McGregor has proved to be one of the best UFC fighters in his category. Some have attributed McGregor’s recent defeat to his 4 1/2 years inactive. “It’s hard to overcome inactivity,” McGregor insisted. “That lower calf kick was very good. I wasn’t comfortable as I needed to be. Dustin was some fighter. I have to dust it off and come back. I need activity. You don’t get away with being inactive in this business. I’m going to regroup.” Even though Khabib Nurmagomedov is officially the titleholder, Dustin Poirier, who considers himself the reigning champion after today’s match against McGregor sees it differently. “I feel like this was the title fight,” Poirier said. “If Khabib’s not coming back, I feel like I and Conor are the two best guys. I’m the champion.” But hardly should Poirier worry about Nurmagomedov and McGregor alone. The 34-year-old former Bellator lightweight champion Michael Chandler, who signed with the UFC in September 2020, could be another headache awaiting Poirier or any other champion in the ring. And Michael Chandler has loudly welcomed any challenger. With Michael Chandler calling out every single top UFC lightweight for a showdown, the lightweight division cannot have more exciting fights to offer. Photo: The Guardian