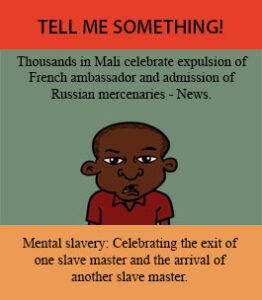 The worst injustice one can do to themselves is to believe that their condition is permanent or accept that only others can change their situation or destiny. Your condition becomes irremediable when you think that flying is an incurable illness simply because you were born in a cage. You live in mental slavery when you subjugate yourself to the will, opinion, attitude or beliefs of other people or allow them to define your identity or life. The extreme danger of mental slavery is such that it gives you the impression that your freedom is an illusion and causes you to love and even defend your oppressor, whom you wrongly believe is your saviour. On the other hand, you make an enemy of your true saviour who genuinely wants to save you from the oppressor. Mali celebrates expulsion of French ambassador and admission of Russian mercenaries. Acceptance of any form of enslavement means degrading oneself and losing one’s dignity and self-respect. That goes without saying that mental slavery is more or less mental death, and those who have accepted any form of enslavement have inevitably decided to live in the grave of their dead soul. Once our mind is enslaved, it becomes impossible to free our bodies. Psychological freedom and a sense of self-esteem is the best way to freedom from slavery. Unless human beings – and indeed, Africans – learn to be their god – intellectually, physically, economically, politically, socially – rather than relying on outsiders, they will remain colonised in their subconsciousness and various domains. Hence, as Bob Marley rightly puts it: “emancipate yourself from mental slavery, none, but ourselves can free our mind.”